On fatphobia, thin privilege, ‘skinny shaming’, and people’s right to subjective experience whatever their body size

I wrote this for the F-word, but it was too long and I didn’t want to cut it because it all seemed important. I might try write a shorter version at some point, but not THIS point.

Before I start, I’d like to point out that Bethany from Arched Eyebrow is undoubtedly a force for good in the world. She’s creative, interesting, direct and unashamed in a lot of good ways. I like her blog and I like her. But I found her recent post entitled Thin Shaming Isn’t Real problematic, because at its heart the post seems to be denying people the right to their subjective experience based on their body size. That seems to run counter to a whole bunch of things I hold dear, like Health At Every Size and granting everybody the right to be the authority on their own experience.

This is not to say that most of what Bethany’s post said isn’t true. Fat-shaming and its ideological cousin fatphobia exist, and are a mainstay of contemporary Western culture. All she says about being fat and its cultural consequences, professionally, personally, medically, in the media – I wouldn’t argue with any of that for a second. Fat people are subject to structural oppression in ways thin people are not – the obesity register, employment discrimination – and as this article makes clear, Bethany is right that thin shaming and fat shaming are not structurally, socially or culturally equivalent.

This is a very difficult post to illustrate without replicating the problem, but I liked this.

Accordingly, structural thin privilege also exists, and it consists of all the things Bethany cites – access to medical care, ability to buy clothes (mostly), seeing women of roughly your size portrayed as aspirational in the media, a body type seen as desirable on dating sites. (Although, somewhat aside, I would imagine there are also people specifically attracted to larger bodies who would disregard smaller ones. Human sexual preferences are various, no? But this is a whole separate issue.) In writing this article, I don’t mean to deny or detract from anything Bethany says about the relative cultural loading of thin and fat in the Western world. She is completely right about our cultural context and she writes powerfully and movingly about the experience of being fat within it.

‘Shame’ is a psychological construction, a subjective experience. About halfway through, Bethany asks: “If you’re a thin woman reading this, and you really believe that you’ve been the victim of ‘thin-shaming’, how many of these have you experienced? How has this ‘shaming’ manifested itself? Was it just someone pointing out that you’ve hit the body type jackpot? If so, boo fucking hoo.” I asked for input from people who felt they’d experienced thin shaming, and they cited a variety of things, including:

(As a side note, sometimes people have valid medical reasons for weight loss, and constructing thinness as inevitably ‘winning’ introduces both self-loathing and cognitive dissonance. If we could stop constructing weight loss = positive, or in fact making assumptions about others’ bodies and their experience of them at all, that’d be nice.)

None of that list feels like being told you’ve ‘won the body type jackpot’. It feels like being told that your body is wrong and inadequate and you are therefore worthless. ‘Real women have curves’, for example, implies that people without curves aren’t real women. That doesn’t erase the much greater rhetorical punishment meted out to fat people – every thin person I spoke to underlined the fact that undoubtedly fat people have it much worse than thin people in contemporary culture – but nevertheless they still had experienced being made to feel ashamed of their bodies.

We all, thin or fat, experience our bodies from the inside, and we all live in a culture where we are judged on our external appearance and our physicality and encouraged to find them wanting. We all live in a culture where people are bullied about their bodies. If a statement is made with hate or contempt about one’s body, it is hard not to internalise that as shame, particularly when it happens a lot, and in repetitive terms.

And being thin – winning the cultural jackpot, as Bethany puts it – isn’t much help when you DO have an eating disorder, or a medical condition. These things don’t magically get better when you can look at yourself and go ‘oh, I’m a size 8’. (I remember once thinking I was thin enough, maybe. I weighed 4 stone, and lost another before I finally collapsed and was hospitalised. Again: experience is subjective, and we all experience our bodies from the inside.) 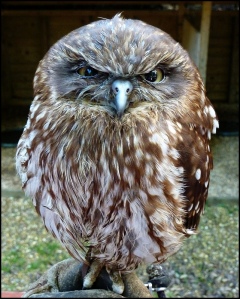 This owl is unimpressed with contemporary fatphobic body-shaming culture.

The whole point of Health At Every Size, and trying to build a culture without body shaming, where everyone’s body is appreciated and accepted – which is the revolution we’re all after, right? – is that *all human beings* are respected as individuals and allowed to tell their own stories. Moving away from a model of health or aspiration or wellbeing as represented by a narrow range of body types and characteristics, and towards a plurality of bodies, each seen and accepted on their own terms. Denying the validity of some people’s experience because of their body type is not going to help create that world.

Sure, some people are dicks. Some people do intentionally whine about being unable to gain weight in order to highlight their ‘winning of the cultural jackpot’, or to make larger people feel bad. Lots of people genuinely do spout bullshit like ‘you look so good, have you lost weight?’ and consider it a compliment. (I am not trying to ignore or deny the prevalence of fatphobia or its all-pervasive effects.) Some people also proclaim loudly ‘real women have curves’ and tell thin people they’re too scrawny to be sexy or they look like an alien instead of a human being. Some people are dicks, but that is a universal truth, and whilst fat people are undoubtedly disproportionately subject to cultural derision, that doesn’t constitute the right to erase the experience or existence of those at the other end of the spectrum who also experience body shame.

Fat-shaming and thin-shaming are in no way equally loaded, because both of them take place in an ideological matrix of fatphobia and thin privilege (thinphilia?). Nobody of any size or any sense would, I think, deny that.

(And if the exasperation in Bethany’s tone comes from people trying to construct thin shaming and fat shaming as directly equivalent, then fair enough. She has a right to rage and exasperation directed at the oppressive structures that work against fat people, and a right to decentre the conversation from thin people’s experience.)

Certainly none of the women, fat, thin and everywhere in between, to whom I spoke when preparing this article sought to deny that our cultural context is overwhelmingly weighted in favour of the thin. But ultimately, body shaming and body fascism are the problem. By all means decentre the conversation from the experiences of thin people, punch up the privilege axis, but don’t deny their right to their experiences. We need to stop judging others and valuing others on the basis of their bodies, and whilst there is greater social and structural prejudice against people of size, denying the experience of thin people because they are thin is simply perpetuating that cycle.

I’m going to finish by quoting an excellent friend of mine, @Inbetween_Girl, who neatly summed up the thousand-odd words I’ve just written in a single Facebook comment:

‘I wish we could stop separating fat-shame and skinny-shame and just call it body-shame. I do feel, from my own experience as a fat woman, that there is greater and more widespread societal prejudice against people of size, but this does not diminish the individual experience of skinny shame. Body fascism is unacceptable in any form, and categorising it creates unnecessary division.’

So, about that revolution…?

6 Responses to On fatphobia, thin privilege, ‘skinny shaming’, and people’s right to subjective experience whatever their body size